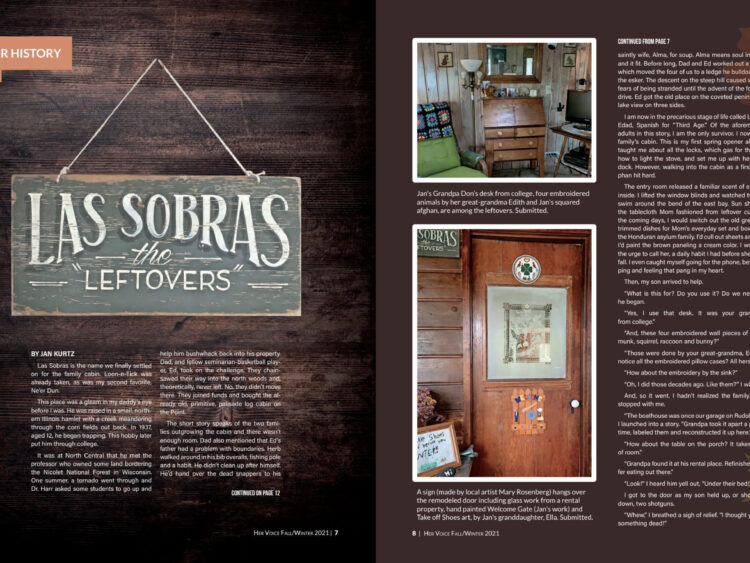 Las Sobras is the name we finally settled on for the family cabin.  Loon-n-Tick was already taken, as was my second favorite, Ne’er Dun.

This place was a gleam in my daddy’s eye before I was.  He was raised in a small, northern Illinois hamlet with a creek meandering through the corn fields out back. In 1937, aged 12, he began trapping.  This hobby later put him through college.

It was at North Central that he met the Professor who owned some land bordering the Nicolet National Forest in Wisconsin. One summer, a tornado went through and Dr. Harr asked some students to go up and help him bushwhack back into his property. Dad, and fellow seminarian-basketball player, Ed, took on the challenge. They chain-sawed their way into the north woods and, theoretically, never left. No, they didn’t move there. They joined funds and bought the already old, primitive, palisade log cabin on the Point.

The short story speaks of the two families outgrowing the cabin. But, Dad also mentioned that Ed’s father had a problem with boundaries.  Herb walked around in his bib overalls, fishing pole, and a habit. He didn’t clean up after himself. He’d hand over the dead snappers to his saintly wife, Alma, for soup. Alma means soul in Spanish, and it fit. Before long, Dad and Ed worked out a land split which moved the four of us to a ledge he bulldozed out of the esker. The descent on the steep hill caused warranted fears of being stranded until the advent of the four-wheel drive. Ed got the old place on the coveted peninsula, with lake view on three sides.

I am now in the precarious stage of life called, La Tercera Edad, Spanish for “Third Age.”  Of the aforementioned adults in this story, I am the only survivor. I now own my family’s cabin. This is my first spring opener alone. Dad taught me about all the locks, which gas for the mower, how to light the stove, and set me up with help for the dock. However, walking into the cabin as a first time orphan hit hard.

The entry room released a familiar scent of everything inside. I lifted the window blinds and watched two geese swim around the bend of the east bay. Sun shone over the tablecloth Mom fashioned from left over curtains. In the coming days, I would switch out the old green, white trimmed dishes for Mom’s everyday set and box them for the Honduran asylum family. I’d cull out sheets and towels. I’d paint the brown paneling a cream color. I would have the urge to call her, a daily habit I had before she died last fall.  I even caught myself going for the phone, before stopping and feeling that pang in my heart.

Then, my son arrived to help.

“Yes, I use that desk. It was your grandfather’s from college.”

“And, these four embroidered wall pieces of the chipmunk, squirrel, raccoon, and bunny?”

“Those were done by your great-grandma, Edith. Ever notice all the embroidered pillow cases?  All hers.”

“How about the embroidery by the sink?”

“Oh, I did those decades ago. Like them?” I winked.

And, so it went. I hadn’t realized the family lore had stopped with me.

“The boathouse was once our garage on Rudolph Road,” I launched into a story. “Grandpa took it apart a piece at a time, labeled them and reconstructed it up here.”

“How about the table on the porch? It takes up a lot of room.”

“Grandpa found it at his rental place. Refinished it. I prefer eating out there.”

I got to the door as my son held up, or should I say down, two shotguns.

“Whew,” I breathed relieved. “I thought you found something dead!”

By day’s end, he learned that the wood box had once been Grandpa’s baby bed, the yellow dishes with the barn and cherry tree pattern were Grandma’s favorite, the rag rugs were from 1940s pant scraps, like the quilt he has at home from Great-grandma Nellie.

Leftovers. Sobras. Recycled, Repurposed. Re-imagined. A family that handed down their Great Depression habits – all remarkable. But now what?

“Should we sell and buy a place closer?” he ventured.  “This is a seven-hour drive. It doesn’t even have indoor plumbing!”

The evening lake stilled. The two geese screeched into takeoff. The spring peepers were delightfully deafening. A soft rain tapped on the roof. We were tired and hungry.

“What should we have for supper?” he asks.

“Leftovers,” I respond. “Let’s use the leftovers.”