Asylee: A person who is seeking asylum/protection, but not yet recognized as a refugee.
Refugee:  Seeking refuge/ safe haven.

Refugees are persons who are outside their country of origin for reasons of feared persecution, conflict, generalized violence, or other circumstances that have seriously disturbed public order and, as a result, require international protection.

Samir, El Salvador.  Pacheco, Honduras.  Lorena, Guatemala. It was my job to translate their stories, prepare their paperwork, and practice their interviews for the time the Canadian judge would review their cases. If their details demonstrated a well-founded fear of prosecution or possible death if deported, they were accepted into Proyecto Canada. The Overground – a chain of churches, individuals and organizations – provided food, shelter, and transportation until they crossed into yet another country.

One such group met last week via Zoom, bringing like-minded folks together from half a dozen states and as many denominations. Some participants had visited Arizona’s border facilities. Some attended webinars led by Texas churches. Others represented non-profits working with incoming border crossers held in detention centers. All wanted to get children out of border cages, back with families, and planned to host such a family in their community.

After two years of incremental activities, the assembled reviewed their preparation list for hosting an “Asylum Family.” Legalities, finances, living quarters, medical, translations, socializing, transportation – the list filled twenty-one pages. The enormity of the task washed over them, yet each one signed on with their personal offerings of expertise.

Their discussion mirrored my 1989 experiences. I recalled Samir, an El Salvadoran Army mechanic sitting across from me, hands folded, head down, whispering his tale of torture, being left for dead, recovering, then realizing he had to leave his family and flee. Were they reunited?

On May 1, 2021, another story will be added. This time, a family, yet to be chosen, will arrive. Airplane tickets will be purchased.  An apartment awaits, but needs furnishings.

It’s time for a course in intercultural communications. What do they eat? Does their kitchen need a microwave? Should the pantry include white flour or corn masa? Or, both?

Are these stereotypical assumptions? Maybe the asylum family cooked tortillas on a comal over an open fire, but maybe it is an elite family that got on the wrong side of their government. Comal or microwave? I say: Both!

FOOD. The international bridge that bonds all who eat. Plan a get-acquainted activity via a grocery-shopping field trip. Choose a dish from both cultures, list ingredients, shop, cook, and eat. The cavernous cereal aisle with its myriad choices, sugar content, language barrier, and pricing can send the newcomer fleeing the store for air. Experience sensory overload together!

The people behind immigration labels are survivors of miles of tense, often unspeakable hardships. Something monumental happened that put them on this path. Being with you is the next step in their journey.

Maybe you will be their teacher.  Maybe they will be yours.  I’m guessing both.

Set another place at the table.  Buen provecho.

This week, MPR aired a speech by Rev. Charlotte, Franz, Duluth, MN.  This is the most concise, clearly spoken, to the point presentation I’ve heard on U.S. immigrant history – the myth of welcome taken with each new wave of immigration; the unknown agreements, the foundations of racism and the response by the Duluth community.  This is not dry history. This sheds light on the path we are on and leaves us with hope.  (This one hour is worth an entire college semester course, without an exam!) 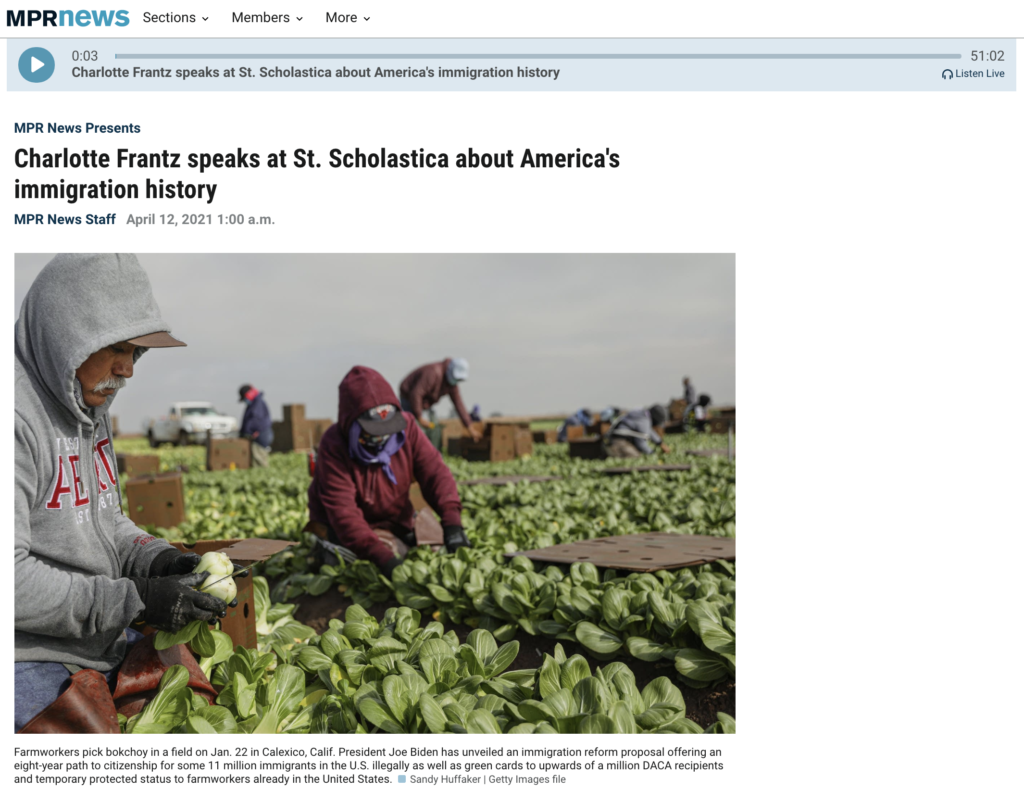