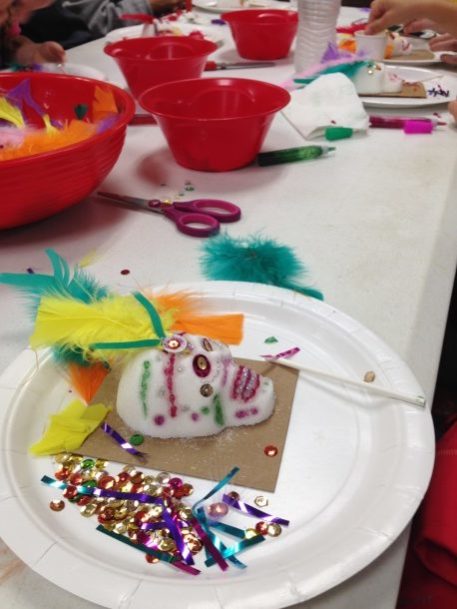 A chilly breeze rattles the yellowing maple leaves. The sumac turns blaze red, outlining the browning cornstalks drying in the fields. Orange pumpkins polka dot the gardens. The half-moon sheds long shadows through the forest. A murder of crows caws out of the branches and into the sky. It is October in the north country. Stores are filling with dangling skeletons, fake tombstones, inflatable ghosts, creepy masks, and bloody make-up.

South of the border, the markets are filling with long stem golden cempasuchil flowers, those marigolds with blooms the size of two fists held together. Plumes of copal incense smoke cloud the air over the beeswax candles being decorated with black and purple streams of ribbon. Bakery windows fill with panes de muerto, which I unceremoniously translate as “Dead Bread.” These rounded loaves decked with braided dough or cross bones, and sprinkled with red sugar symbolically date back to the Aztecs.

Día de Muertos, November 1st and 2nd, might be close to Halloween’s October 31st on the calendar, but are separated by history, culture and message. Halloween dates back to the ancient Celtic Druid’s belief that, on the last night of the year, the veil between life and death was lifted, thus allowing the dead to return to earth. Large fires were kindled along their main streets to keep the dead from entering their villages.

Or, you can go with the Christian history, dating to 835 AD and Pope Gregory IV’s proclamation of All Saint’s Day as a time to remember the martyred and otherwise deceased saints. The Día de Muertos evolved from Spain’s Catholic commemoration mixed with the Aztec rituals of passage into the land of the dead. Conquistador Hernán Cortés entered the Aztec capital of Tenochtitlán in 1519 with the Spanish Crown’s mandate to convert the natives, resulting in this syncretic combination of revering the dearly departed. The new converts retained some Aztec beliefs, conserving the practices of putting out altars with the favorite foods and drinks once enjoyed by the deceased when they were reunited with their families after following the path of marigold petals back to their earthly homes.

My northern culture offers me the grim reaper, that ghoul in a hoody carrying a sharp scythe ready to cut us down. It offers up horror movies, loud pitched screaming and advice to keep the coffin lid shut, don’t take children to funerals and clean out the deceased person’s worldly goods quickly, so as not to be reminded and feel sad. Erase and move on?

Mexico’s morphing of traditions offered me the Catrina, a dancing skeleton with her fancy party hat, smiling and enjoying a few bawdy hours back on earth. She was not here to “get me” and take me with her. She is a reminder to live life to its fullest. She gave me a new way to process grief, to speak the names of my deceased family members, to put out their photos and share their stories thus keeping them alive. Now to go to Mexico and see this holiday in person.

Jamy, a friend and former student, and I took off for the Spanish Language Institute’s week long Día de Muertos offering in Cuernavaca, Mexico. We bought marigolds, crafted the sacred purple and black candles, tasted the special breads and photographed arrays of sugar skulls and toy altars before the big day in Tepotzlán, a neighboring village with deep indigenous ties. There, we were given a clay mug for the ponche drinks that would be offered, and followed the marigold petal paths into homes including life-sized effigies made with the deceased’s clothing, large sugar skulls at one end and their actual shoes at the other. These were surrounded by six-foot candles, baskets of bananas, mangos, papayas, and photos of family members. The night filled with the smell of copal and buckets of tamales, ready to be unwrapped and eaten by guests.

This October, Jamy, my granddaughter, Ella, and I took this tradition to twenty-seven local moms and their children at Nancy’s Fancy Pants Chocolate Shop. It was a rainy, cold, hypothermia Saturday, but inside, the class filled with energy and excitement. The tables were set with bowls of sequins, ribbons, foil streamers and glitter-glue sticks. Our power point cycled photos of cemeteries, home altars and markets from our Día de Muertos trip while we described the traditions followed by decorating instructions. Everyone was given a sugar skull and the warning that glue does dissolve sugar!

An hour later, twenty-seven works of art were ready to remember – maybe a family member, a pet or perhaps the most important remembrance: The memories you are making right now.

The movie, COCO. It is a Pixar production that beautifully portrays the Mexican holiday with color, compassion, humor, music and detailed authenticity.

I give it: Five (star) Sugar Skulls! Trailer to the movie:

Nancy’s next class will be on Gingerbread Houses TBA