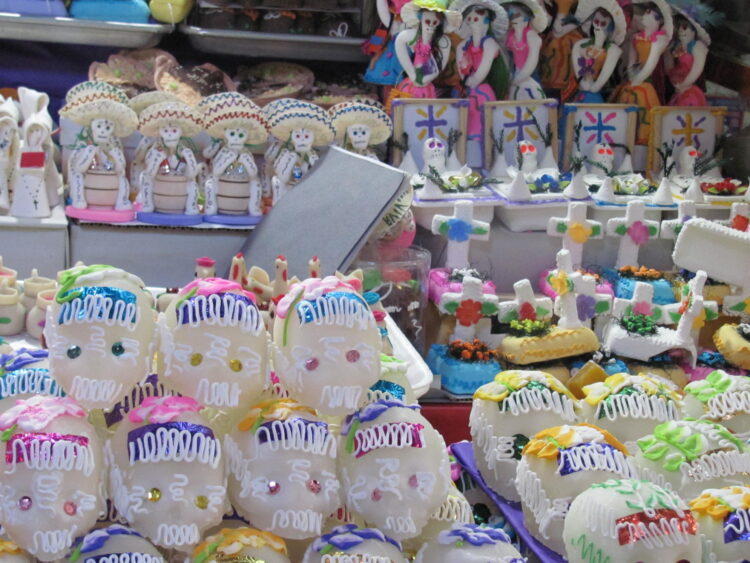 If it weren’t staying darker in the morning and getting darker earlier in the evening, it would be difficult to guess that these seventy degree days belong to October. The yellow aspen leaves falling among the dry red pine needles is another clue to the season. I am wearing shorts and a T-shirt as I rake. The breeze carries a hint of autumn, stirring my cellular memory to my favorite celebration. No, not Halloween, but Día de los Muertos!

Last year, my annual preparations were confined to baking a few loaves of bread, the traditional Pan de Muertos, which I gifted to the women bringing food to me and my mother during, what turned out to be, the last month of her life. I punched down those rounds of yeast dough, kneading it the prescribed ten minutes, putting my knuckles to the task. The kitchen filled with whiffs of anise. I rolled three long strands, and then braided them together – one strand representing the past, a second strand the present, and the third the future.  That is what I decided they meant. Long ago, I gave myself permission to borrow and create ideas to make the rituals that best suit my spirit.

Día de los Muertos is a prime example of (word of the month) syncretism – the coming together of ideas, beliefs, philosophies, traditions – and fusing them together into a new entity. The result combines recognizable items, morphing them into a different belief system or pattern. In the case of Día de los Muertos, we travel back to the Aztecs, circa 1300s to 1500s, and discover their beliefs about death and rituals of transition into the afterlife.

They believed that human sacrifice was required to feed their gods and literally, keep the sun rising in the sky. It was honorable to be sacrificed, die in battle, and for the women, to die in childbirth. These people had a more direct route to Paradise. Others had a four year journey, including trials, hardships, a dog guide (Xolo), a river to “cross over” and thirteen levels to ascend. Burial included items needed for this journey, thus today’s breads, tamales, squashes, beans and mescal.

Enter the conquistadores and their Catholicism. Whereas the Aztecs sacrificed many to the Sun; the Catholics believed in one sacrifice, the Son. Ironically, (to me), the Aztec priests did break the bodies and drink the blood, the very symbols of Christian communion.  The Catholics have All Saints Day, incense, candles, chanting, the bread and the wine.  Here comes the “syncretic” piece. Blend these together with the Aztecs and we get the metamorphosis into current celebrations of Day of the Dead – recognizable but distinct between countries and individuals.

When I was faced with death and grief, my culture did not have the tools to ease me along the path from shock and denial to the end goal: acceptance. Even our vocabulary was in denial. “Bought the farm, six foot under, pushing up daisies, even saying “they passed” doesn’t pronounce “the word that burns our tongue,” ie: dead.  Ah, but I had another culture introduce me to other options!

I adopted the candles, the copal incense, the marigolds, the Dead Bread, the calaveritas sugar skulls and the altars, making them my own. In one corner of my cabin there is a small shelf with a painted rock (done by my granddaughter), a loon feather found while canoeing, a Beany-baby bunny discovered abandoned at the top of Sheltered Valley Ski Hill, and two photos in a single frame:, one of a kid’s poster drawing of the earth titled: Listen to Your Mother, facing a picture of my mom. It has been added to over time, but has become her ofrenda/altar.

Up until COVID, I incorporated Día de Muertos at church, in craft classes and with the local Spanish Clubs through the years.  Between my mother’s recent death and the 700,000 dead to the pandemic, how could I not resurrect my favorite holiday?  I dropped my rake and began texting. Within a few days, we had set the dates, bought the sugar and retrieved the boxes of decorations. 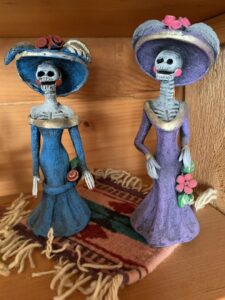 Jamy, my companion in sugar skull making, was on board.  Saturday, we’ll gather the bags of sugar, the bowls, the cardboard boxes and get to work.  There might be chili and cookies involved when we are finished. Then, we’ll pack up the posters, the statues of the Catrinas (female counterpart to the Grim Reaper – but she parties in her big hat and loves coming back to earth to drink and dance ) and get ready for Nancy’s.  She owns Fancy Pants Chocolates and offered to sponsor our sugar skull decorating event.  Britt, teacher in charge of the local high school Spanish Club, put in her order. We’re good to go!

The traditions presented to me by the Mexican method of celebrating Día de los Muertos was more than a holiday. It introduced me to a healthy and happy way to approach death and remembering. I embrace the memories.  I call out their names. I smile. I cry. It’s a process.

Not all cultural sharing, blending, or overlapping rituals are life-changing, but they are life-enhancing. Life is a smorgasbord, not a diet. I’ve included here a few links to get you started. LA MEZCLA – the mixing – syncretism. Take what suits you and create your own traditions!