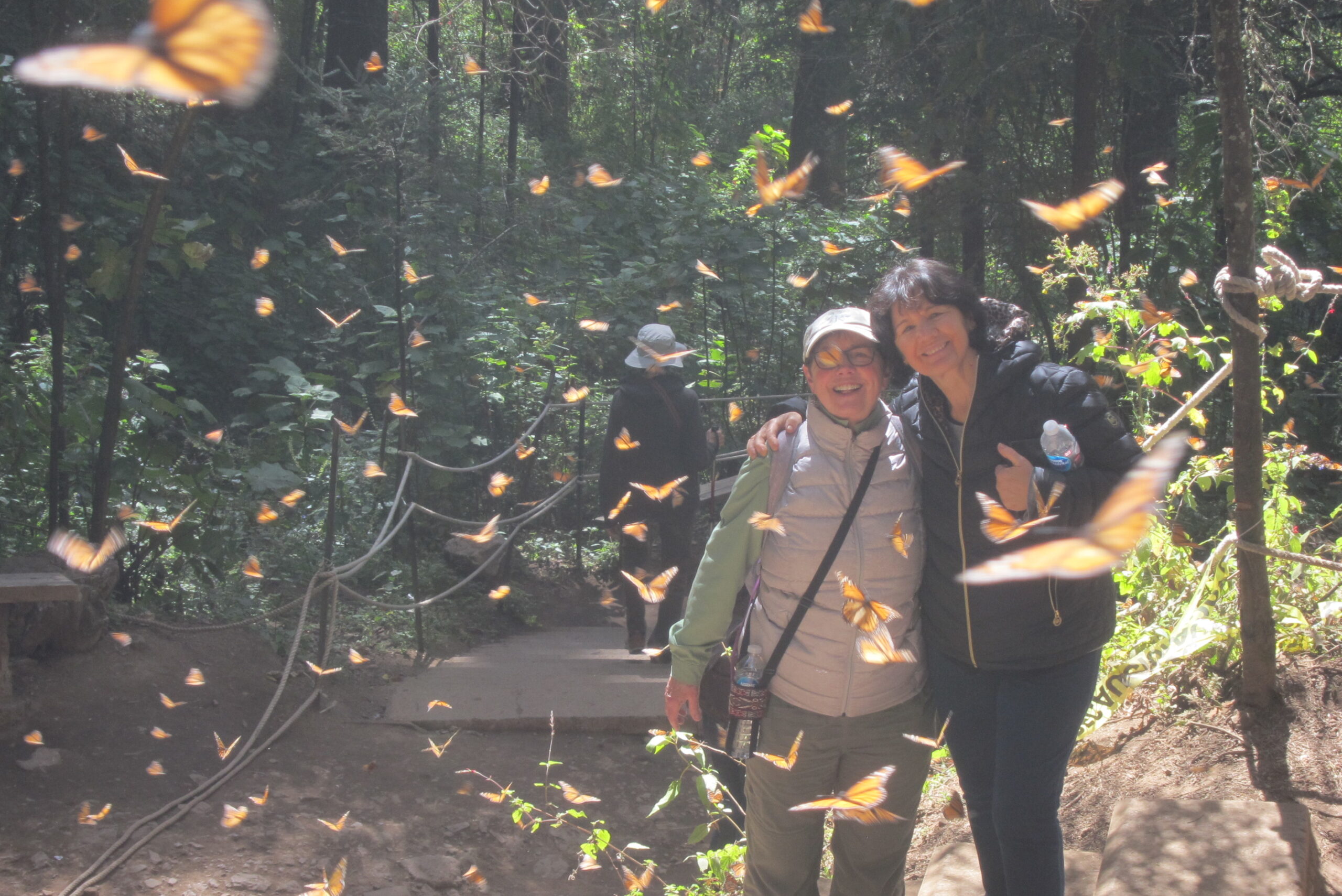 Last fall, an email arrived from SLI, Spanish Language Institute in Cuernavaca, announcing its annual trip to Morelia, Michoacán to visit the Rosario Monarch Sanctuary.  Last year, I had pondered too long and the trip filled before I wrote to commit. This time, I was already enrolled in Central Lakes College Spanish trip to Cuernavaca in March, 2019. How could I justify (yes, justify) two trips to Mexico within three months?  That felt over the top – at least for one of my upbringing. 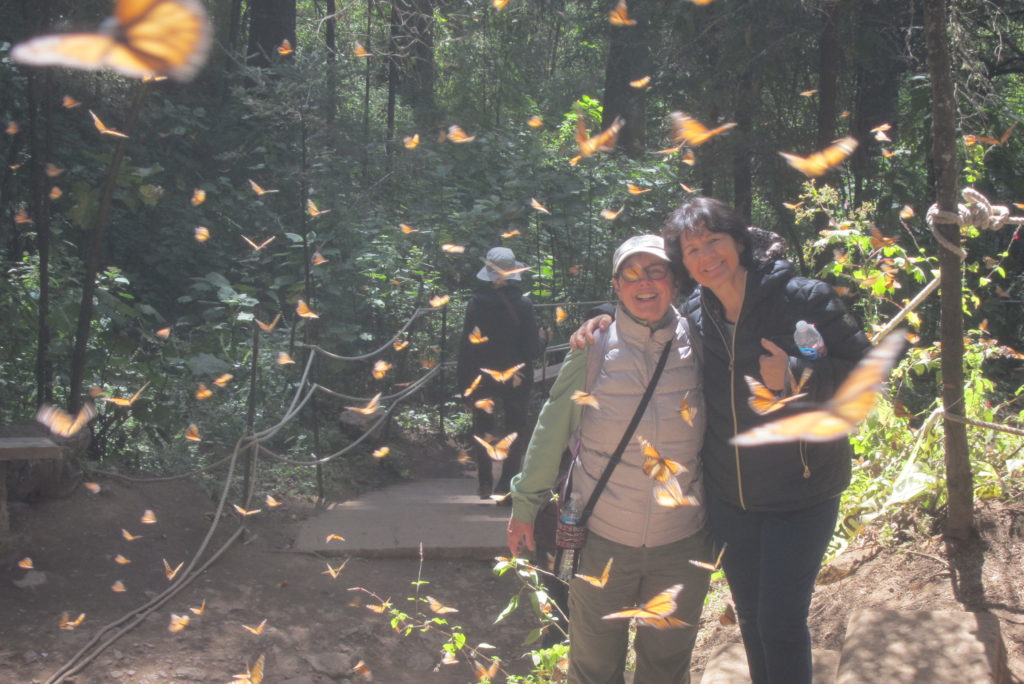 Yet, I have loved monarch butterflies since childhood. They were a reliable sign of a changed season. Winter was gone, melted away for good when the orange and black butterflies flitted around my mother’s flower garden. It never occurred to me that one day, they might be extinct. They laid their tiny white eggs on the milkweed, hatched into miniature caterpillars, ate their way into fat, curious worms with antennae bobbling on both ends, and then morphed into a cocoon/ chrysalis. The most amazing thing was yet to come.

Inside the dainty green capsule with its circle of gold dots, a mush formed. A liquid. A concoction. Goo. In ten to fourteen days, the pupae turned black. If you looked closely, the black included orange and the distinct pattern of monarch wings “in utero.” When I put them in a container, feeding them fresh milkweed daily, watching them crawl to the stick I placed there, I could watch the entire process, waiting for that moment when the completed butterfly emerged. Wings draped, catching a breeze, drying there for an hour or more and then, flight!

As years passed, something else seemed to be changing. Where were all the monarchs?   Fewer monarchs were arriving from Mexico every summer. Today, decades later, it has become clear. The pesticides in our fields and along the roadways have been harmful to our pollinators. The butterflies and the bees are dying at alarming rates.  People and townships mowing along the roadsides are removing the habitat for milkweed, home to the eggs and required diet for the caterpillar, bees and other insects, required to propagate our food chain.

On the south side of the border, another human element was destroying the monarch’s winter forests. Logging. Illegal logging. The economy of the south left few options for the locals in the mountains around Angangueo, a small town now developing into the stepping off point for monarch reserve visits.

In the past, massive trees were being cut and the butterflies had fewer and fewer places to over winter. Those pines were loaded with monarchs, so heavily laden that large branches broke under the weight. Millions of monarchs floating in the updrafts of the mountains, mating and then falling dead on the earth below.  That is the natural cycle. Sadly, more of them were falling dead due to chemicals and cut vegetation along the roadsides between their northern and southern homes.

I looked back at the email, outlining each day’s itinerary. I forwarded the information out to my Mesa (Spanish Table) group of community members that meet weekly to speak Spanish. I hit send and turned off the computer, resigned to the feeling I would put this off another year. How long could I keep doing that?

But wait. An email came in simply stating, “I still have my passport. Just saying.”

That was it. Jamy and I sent a flurry of emails back and forth. By the end of the week, we were signed up with SLI, held roundtrip tickets straight into Morelia and asked Maru, my friend and coordinator of the tour, what we needed to do next.

In January, 2019, we stepped off our plane into the Morelian night. The taxi took us along dark, indistinguishable roads and dropped us off in front of the Hotel de la Soledad, where doormen whisked us and our luggage into the main lobby, a magnificent patio trimmed with red and pink bougainvillea and a splashing colonial fountain in the center.

Ah, but I’ll get back to that another time. Today, I am looking into a large peanut butter jar with wilted milkweed leaves, a smooth stick and a chrysalis.  Yesterday, butterfly # 16 took flight.  Three more jars hold their precious cargo all lined up on my porch.  One looks like it has gotten twisted and hard.  That is the second time this summer.  The second is lime green with its crown of gold.  The third is turning black, a good sign.  It will become totally black before it begins to wiggle and then free itself.

Unlike some of the commercially sold caterpillars, these monarchs will know the route back to Mexico.  They will go through the normal cycles requiring four generations of butterflies to eat, mate, lay eggs, die and send their offspring on the next leg of the journey.

We are connected to their journey and their survival.  Perhaps today is the day you look for a caterpillar.  If you live in the country, you can leave a swath of grasses along your roadside when you mow.  Mow less.  Next spring, plant a butterfly garden.

Or, complete the cycle and travel to a butterfly sanctuary and stand among the flittering wings of millions of monarchs.  It is truly glorious to be surrounded by monarchs.