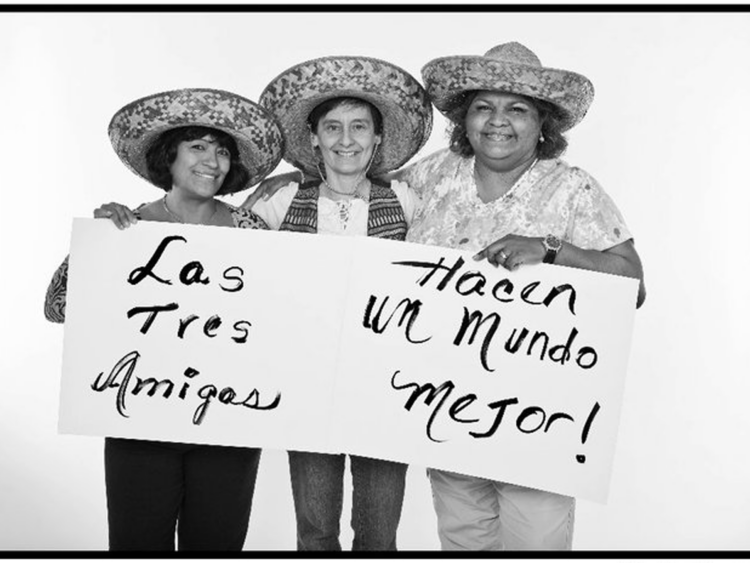 “What I believe in is ‘joyful fatalism’ – my own term,” Patti told me as we caught up after a 37-year-haitus.

In 1985, Patti and I were Spanish teachers, she in Iowa and I, in Minnesota. It was part of our job description to take high school students out of the country. Well, maybe not a concrete requirement by our districts, but one that we deeply believed in to give our students the cultural/language immersion necessary to steep them into the world we loved.

Our paths intersected when both our school groups landed at the Centro Bilingüe in Cuernavaca, Mexico for a study/travel time.  Patti and I stayed with Rosita Partida, director of student housing, along with other participating teachers. Rosita and her husband, Rafael, sat at the head of the long dining room table, usually set for a dozen. Her mother, Doña Nico, helped the maids cook and serve our delicious meals.

The living room was filled with gold-guild furnishings, statuary, large artwork, and located two steps up from the dining area and connecting hall. Teachers resided in the bungalows around the large patio and pool, just outside the sliding glass door. These areas were once constructed for the Partida children as they grew up. The parents’ rooms were upstairs, a place never open to the public.

As teachers, we could opt to attend the Centro’s classes, but expected to check in with our students. We met them at the entrance at 8:00 a.m. and dispersed to our first hour, meeting again at mid-morning for break time at the cafeteria.  All classes were open air to patios, gardens, and a few reflecting pools. The cafeteria was a kitchen with a long open window displaying snacks, cold drinks, and some hot items in the taco/tortilla family, taken to the al fresco tables and benches.

But, I digress.  As teachers, Patti and I “mother-henned” our broods, accompanied them on field trips, helped with homework, and mostly saw each other only at that dining room table with Rosita frowning and waving her pointer finger at us if we spoke English. That was 1985 and last summer, in 2021, Patti saw my picture in the weekly “Up North” newspaper, advertising my book event at Mind Chimes Book Shop in Three Lakes, Wisconsin.

“I knew it had to be you,” she exclaimed when we met at Riverside Park. “It was the Lake Julia plus Spanish teacher clues.  I remembered you mentioning the lake.”

“So,” I asked, “how did I miss that you had a connection here?”  incredulous to the fact that Patti’s family had been coming north since 1954 and mine since 1956! How did we not put that piece together before? Look at all those summers missed. . . I let the thought trickle away.

In the next five hours, yes – I said, five hours, our conversation flowed, intentionally following thoughts to a specific point before being railroaded into all the venues every single subject tried to take us. It isn’t easy to stay on topic with every story breeding three more.

“Spain? You studied in Spain, too?  Where?” she asked.

“In Seville for a semester. I lived with a family and went to the Universidad there.”

“Did you stay with ‘Maru de la casa’ in Cuernavaca while ‘Maru de la escuela’ was there?”

“I wasn’t brought up with church, but my son was born with lots of challenges. It changed me.”

“Me? I’m a preacher’s kid – I was in everything from choir to social activism. Church is family.”

Somewhere about this point, Patti introduced me to her phrase: “Joyful fatalism.”

“Did you make that up yourself?” I asked. “That sounds so, so. . . Gabriel Garcia Marquez, so One Hundred Years of Solitude, so . . . what do they call his writing?”

“Is your fatalism referring to the Latino idea of ‘death is always just over your shoulder’ or more of the resignation that what is going to happen, happens, so that is that?”

She paused to let me ponder.  I continued.

“I used to teach with Liliana, an Argentine woman. We shared the same office and sometimes people mistook me for the Latina and her for the German! We often compared cultures and beliefs, especially because of our different ways of approaching life. She summed it up this way:

“Jan, it’s like this. Right now, there is flooding in the Red River Valley. Your people are volunteering to fill sand bags. They are bussing college kids out there to try and divert the river. They want to control nature. Now, my people. . . my people are up on top of a hill, eating a picnic, and watching your people scramble. That is the difference.”

Is that fatalism?  Yet, is the picnic not joyful?  This is more than a potential oxymoron. It is so much deeper than “jumbo shrimp” or George Carlin’s “military intelligence” quip.

Patti’s silence spoke volumes. I’d have to come to my own conclusions.

Patti and I stayed steady with the many paths our conversation paved that afternoon. More than two Spanish teachers with travels, our classroom kids, purposeful life lessons we hoped they learned, we were two women recognizing parallel woes, giggles, mothering, and ended with the power of prayer.

All of this began years ago at Rosita’s, a woman who chose to bring the foreigner to her table, serve them her mother’s chilaquiles, and admonish them to speak Spanish. Doña Nico spent over 100 years on this planet, leaving in 2021. Rafael died unexpectedly within this past decade, both dearly missed by all.*

Maru “de la casa” still houses students for Centro Bilingüe, now a university for mostly Mexican students. They reside in the added bungalows that her son, Vito, advised would be a good investment.

Maru “de la escuela” and her husband, Paco, joined Rosita and Rafael, when they left the Centro shortly after Patti and I had met them, to create ASLI, their Spanish Language Institute, still offering Spanish programs to all ages and professions. The mission of language and culture lives on.  http://www.spanishincuernavaca.com

Our lives are richly woven together. Was it fate? Like Patti, I leave you to ponder your own beliefs. If all of our meetings are fate, I’d at least like to think my reactions to them are my own. I tweaked Patti’s phrase to:  Joyous fatalism – perhaps synonymous, but it felt like a choice!

*Sadly, after writing this essay, I received news that Rosita Partida died on June 6, 2022. She was the “mother” to hundreds over the years, always greeting us with love and acceptance. My condolences go out to her children: Rafael, Juan Carlos, Edgar, and Adriana, their children, and all of us “children around the world” that once sat around her table. 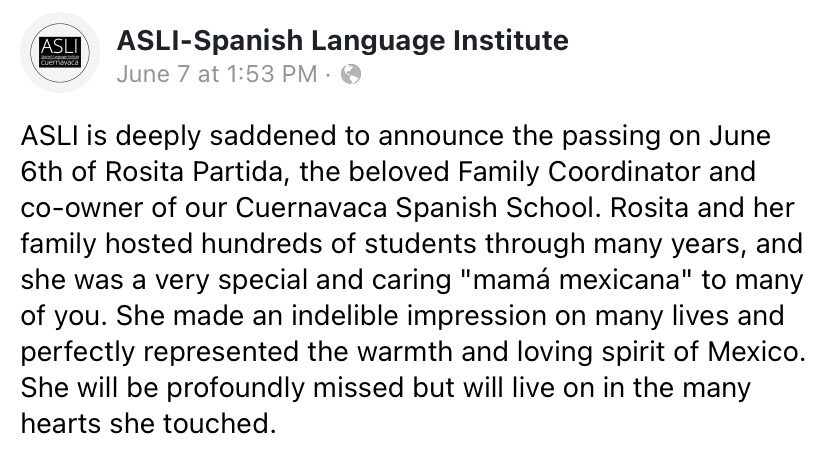