Donald was born thirteen years after his brother, Woodrow, and sister, Wilma, putting him into his own separate family generation. Wilma embraced him as her personal doll. Woodrow teased and taunted him when not out with his hunting dogs. His father, Floyd, took him along with the bridge building crew, of which he was foreman, giving little five-year-old Donald the job of water boy. His mother, Nellie, took him to her back garden to weed and pick raspberries.

These are some of the people I have pictured on my Día de Muertos altar, an antique table with lion’s paw feet, an eagle head carving, and covered with an elaborately tatted doily. It is for November 1st, the day set aside in Mexico to remember the ancestors. Mexico spends the month in preparation. Tamales are prepared, copal incense bought, beeswax candles are wrapped in black and purple ribbons and pots of golden orange marigolds are set out to mark the path back home for the family’s dearly departed to find and follow.

The bakery shelves are stacked with pan de Muertos, small round loaves topped with braided dough in the form of crossed bones or simply a cross motif sprinkled with red sugars. Candy shops sell sugar skulls, some for altar decorations and others for eating. The larger than life Catrina skeleton dons her swooping skirt and broad-rimmed sunhat before dancing down the street on her stilts, with a conga line of folks, faces painted black and white, following behind. Such a contrast to our northern grim-reaper with his hoodie and sharpened scythe coming to cut us down and take us to the other side. La Catrina is delighted to be back on earth and intends to make good use of her time with music, light laughter and her favorite beverage poised to make a toast.

I look over at my family altar, lined with photos of stoic, hard-working settlers of German extract. I try to imagine them kicking up their heels, giddy over life. Such a solid clan from northern Illinois cornfields, creeks, and churches. A people of bib-overalls, muscular hands, snapdragon lined driveways and canned goods in the cellar. A people that taught me, gave me a solid foundation, curiosity and opportunities to branch out.

I bend in to look closely at Grandma Nellie’s photo. The one where she stands on the sidewalk in front of her cottage styled house with the columned entrance she had Grandpa build. She’s holding Gigi, her French poodle, in front of her full body apron that protects her house dress.

Wait. A crack in the family stoicism? Her face. A slight curve up to her lip, the family dimple in her left check and . . . a twinkle in her eye. During World War II, she was one of those folks designated to “keep her eye on the sky” just in case enemy aircraft might be overhead. That and growing a peace garden were among her patriotic duties.

Next to her stands my other grandma, Edith, the quiet one. I mostly recall her sitting in the corner armchair with an embroidery hoop and needle poised to stick the thread into another patterned pillowcase. She also had to stick a needle into her thigh every morning. She had diabetes and the needle was full of insulin. Strange. I remember platters of brownies being offered up to the rest of us with a, “Here, take another.” Maybe she just liked to bake and couldn’t eat the sweets, but why would she want us to eat them? My childhood was filled with the warning, “Don’t eat all that sugar. You’ll get diabetes like Grandma.”

Perhaps the phrase “remembering your ancestors” is misleading. Ancestors implies those antecedents from centuries past. It is likely that most kids today don’t have information beyond their immediate grandparents. For Día de Muertos, I used to assign my college students the task of finding out the last names of their maternal lineage, those “maiden names” in the family, often a detail missed in their upbringing. They were to interview grandparents about their parents, adding two generations to their personal creation story, in real time.

My altar table includes two men that, in my view, arrived there prematurely. My first husband, Jim (died in 1978, aged 25, motorcycle accident) and my brother, Steven (died in 1985, aged 30, terminal illness). In both cases, I was totally unprepared for the effect on my life and empty hole left by their, as we say in this culture, untimely departures. My culture offered nothing to process my grief. Truly, nothing.

It was the Mexican ritual, the open acceptance of death as part of life, the celebration of our connectedness, past to present, retaining the love of those who have died and carrying them in our hearts by naming their names that brought me to the acceptance stage of grief. I pieced together a personal comforting tradition, borrowing what resonated with me from two cultures.

I baked the pan de Muertos for my church’s All Saints Day service. Jamy and I made sugar skulls for Nancy’s Chocolate Shop class and the high school’s Spanish Club. While decorating sugar skull cookies in my kitchen, Nancy and I laughed through decades of memories. In Eau Claire, the altar honored my father, once youth pastor there in the 1960s. Margaret recalled a youth canoe trip he led, when Gordy cast his hook mightily into Terry’s shoulder and how Dad got him downriver to a doctor. Other’s shared their memories, creating a kaleidoscope view of my dad’s life.

No need to wait until next Día de Muertos to tell the stories. Even today you’ll have a chance to interject, “remember the time?” Intentionally include calling up the names of those loved ones, both of those with us in body or in spirit. Naming their names brings them back into focus. Today, go forth and make a good memory for your collection of stories. 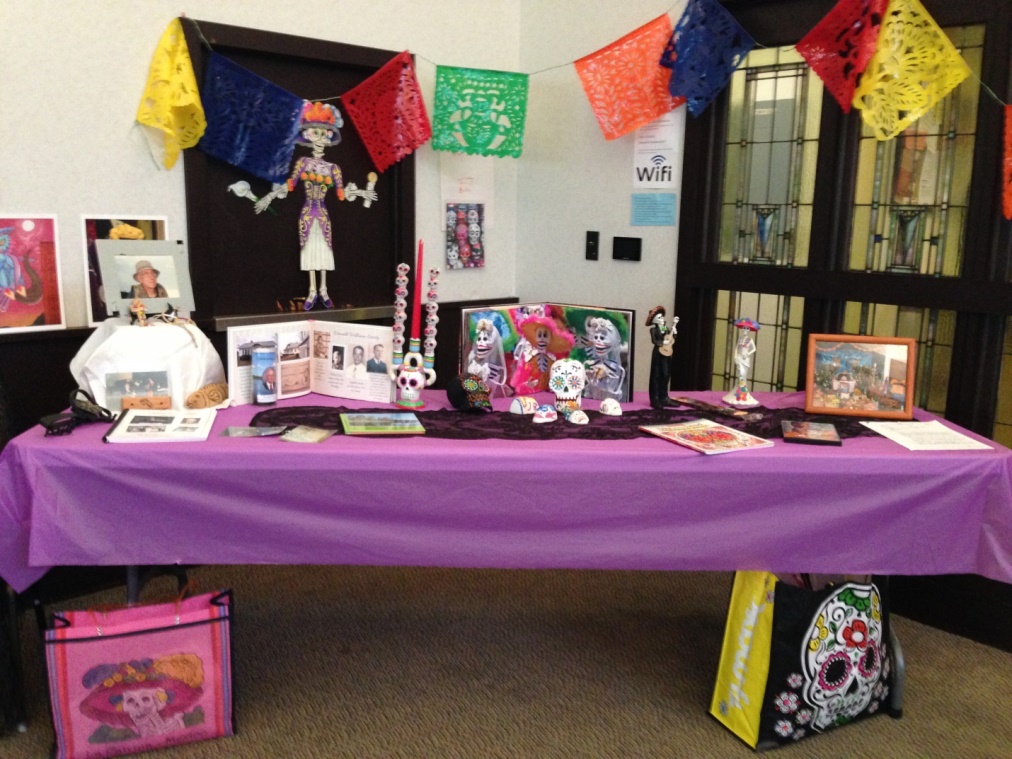 For significance behind the Altars and instructions for designing your own, check this link:

If interested in a smaller altar version, recommended to be done with children either in a grieving situation or to broach the subject of death, make a “Memory Shoe Box” as per: