So, it has come to this. Fifty years after leaving this town for college, I am back, seated in my mother’s car, parked in front of the First Congregational Church where my father was once pastor and my brother and I used to shimmy around the ledge of the 100-some-year-old structure to see if we could make it all the way around without falling.

Today, I came in search of different entertainment. Wi-fi. I had hoped that I would be able to access my email accounts, send off some documents, and again be in touch. Safari, however, advised me that it “couldn’t access a secure” something and would not open the

page. I tried Yahoo, Bing, and Google, all entities that did not exist when I was the child hugging my way around the church’s stone walls.

It is a beautiful church. Elegant in its simple lines, dressed with stain glass and wooden trim. Across the street, a park disguises itself between fall and winter. Leaves scatter down the curbside when a car passes. Several large limbs lie about the open areas between mighty and not so mighty oaks. Two pergolas sit in the center with empty wooden benches gathering leaves beneath. A few gray squirrels blend in, unnoticed until their fluffy tails give a jolt and a wiggle.

A runner trots by, plugged into her earplugs, ponytail bouncing. A young boy scoots himself by on a skateboard, backpack keeping beat on his shoulders with each push. Three college-aged girls just guffawed their way past, an unexpected sound of gaiety, both welcomed into the scene and, at once, horrifying. What are they thinking? They are shoulder to shoulder, not the prescribed six-feet apart. 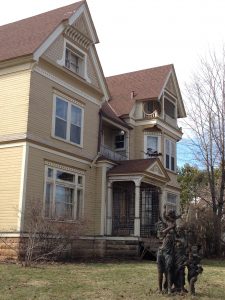 On the corner, a man rakes in front of his Historical Home. Is it David? A man who was once a boy that went to this church when I did? The guy that stayed in town after college. Got himself a job as a Spanish teacher, too. Only, he had the good fortune of being a colleague of my Spanish teacher, another David, traveling with him on student ventures to Mexico.

Right now, I envy whoever that raking person is. They are outside. They have a goal, a mission to rake away winter. Others are planning gardens, even though there is no way to know if they can get the seeds. Mostly, this street is inhabited by ghosts from a month ago and those of centuries past. They were lumber barons in a thriving town. Today, it is a mandated “shelter at home” ghost town.

These large, early last century homes are neatly painted, front porches, groomed lawns, stately abodes. They have housed, at least, one hundred years of human life. They are so trim and proper. How humbling that they have outlived multiple generations while their one-time inhabitants have gone to graveyards or, just now are hunkered down in front of terrifying national news about the virus working its way to middle America. “This should be the worst week for New York, Louisiana, and Michigan.”

So, here I am, in my mother’s car, sitting in front of this beloved church, watching dried leaves scurry down the gutters after the UPS truck passed on his way to a life-saving delivery. Back after a fifty-year hiatus of college, marriage, a son, career, world travel and dreams of . . . 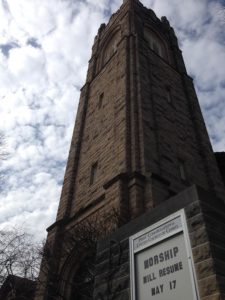 I put the key into the ignition and edge into the street. At the stop sign, I can make out the identity of the two, raking up deadfall. I pull over. He looks up and squints in my direction. I wave wildly, roll down the window and yell out, “David! Soy yo, Jan!”

His grin spread over his face and into my heart. I tentatively step out of my car and stand by it. He comes to the sidewalk and stops. His wife, Gail, approaches rake in hand, keeping her distance.

“Yes, I am still here. I came for Mom’s birthday on March 14th and made the executive decision to ride this out.”

“Yes, it is hard enough without also being away from home, but emotionally, this is where I want to be. I couldn’t be four hours away and not be allowed to return.”

“Yes, we have enough groceries, thank you. I am still doing the shopping and she does the cooking. Every day, precisely at noon, she serves a full course meal on her good china. We only lack wine!”

“Yes, I tried, but with the early ‘senior shopping hours’ the bottle of wine I tried to buy was confiscated. Too early to legally sell!”

“No, that isn’t necessary. We can live without wine. Besides, giving me a Spanish Rioja that I would mix with Sprite is an abomination. My Spanish friends would disown me!”

“Oh, muchas gracias, amigo. Your kind gesture does make my day. Seeing a familiar face and having a chat with friends. I guess I am back home. . .”