It’s in the air.  Change. The mercury falls to the number 32. The clock reads 6:20 a.m., but light has not returned to the morning like it did just a few weeks ago. The coyotes are calling to the full Hunter’s moon, sinking into the west. It is a bewitching hour when waking thoughts begin to take over the fog of dreams.

My thoughts travel back to the weekend when a group nearing fifty AAUW (Association of American University Women) from the northwestern and central regions of Minnesota gathered to learn more about historical trauma of the indigenous and the continually morphing situations for Latinas in immigrant communities. The conference, just two days before Columbus Day observed, we came together.

Susan Beaulieu, an Anishinaabe from the Red Lake Nation, and I were co-presenters given the morning slot in a program we named: SPARK. Susan has received awards and accolades for her work with Epigenetics, Resilience, and Remembering with connection to ACEs (Adverse Childhood Experiences) along with mind-body healing on the individual and group levels. Her very extensive outreach is lifted up in this interview/ podcast: https://psychedelicstoday.com/2022/08/05/pt344/ (click to listen)

We invited two women each to participate in our Indigenous/Latina panel, a place to share life experiences that might “Spark” awareness if not action regarding women’s stories. When we introduced Niizhoo, Michele, Rocio, and Maritza, I was struck by the morphing of four women into representatives of entire histories, starting with the labels on my October calendar. Each label brings forth a different perspective on history and a different vision for the future. 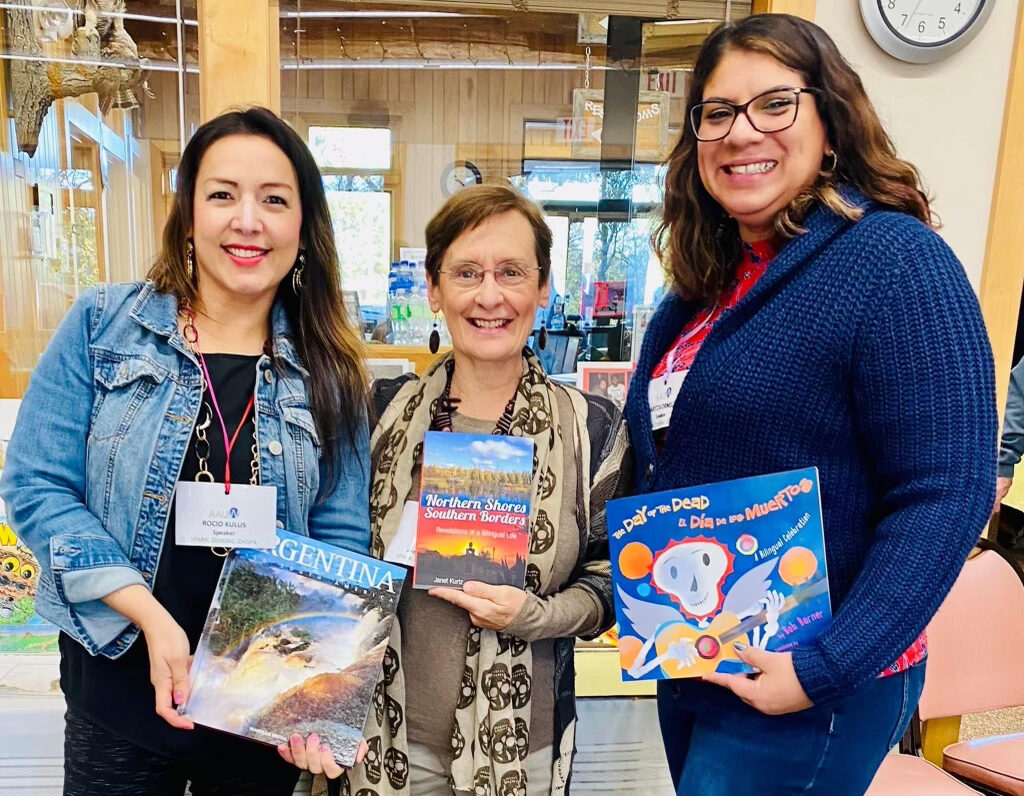 Columbus Day: (proclaimed in 1934, but first celebrated in 1792 by New York Italians)

A man of Italian lineage steps on a land, new to him, and claims it for Spain, the country that funded his journey. A far away Pope had decreed all new territory would be included in “Christendom” with a goal of conversion. Queen Isabella II needed gold to replenish her war coffers. Released prisoners became sailors and later renamed, conquistadores.

Indigenous Peoples Day (initiated at a U.N. conference in 1977) was lifted up in 2021, by President Biden, to bring forth a recognition of the peoples already living on the vast lands beyond the beach where Columbus flew his flag. NPR published a comprehensive map this week on the nations residing in North America before you lived here.

But, what of  Dia de la Raza – Race Day – Day of the (Human) Race, first celebrated in Argentina in 1917 before going on to cover all of the Americas?  U.S. citizens are only a fraction of those called Americans.  I now invite you back to the calendar and the year, 1519, a symbolic day for the human race.

In 1519, another man set foot on a beach far, far to the south of our elementary school story of Columbus sailing the ocean blue. He was only one of legends (and legends) of adventure seeking young men from the European continent. Into history steps Hernán Cortés, a rebellious, antsy soldier from a “minor” noble Spanish family. Cortés defies his commanding officer and leaves his post in Cuba with his fleet, floating westward until he comes ashore at Tabasco, puts down his flag, and calls the place, Veracruz, place of the true cross.  His trek into center Mexico forever changes the world.

Cortés hears rumors of the magnificent civilization of the Aztecs, located inland, ruled by the great Moctezuma. He also hears his men plotting mutiny before the adventure begins. He burns 10 of his 11 ships and marches on.

Meanwhile, Emperor Moctezuma is having bad dreams and premonitions about an incoming force, potentially led by one of their returning gods, Quetzalcoatl. The Feathered Serpent god had been banished by other deities for his transgressions, left to wander, one day predicted to return. When Moctezuma’s runners brought back tales of giants coming off of floating mountains (Billowing sails on incoming ships), with upper bodies of men and lower bodies of animals (men on horseback – horses being unknown), Moctezuma chose to welcome, not attack, this potential returning god.

Back on the perilous trails, Cortés is gifted twenty women by a tribe that had been, shall we say, mistreated by the Aztecs. The women are distributed among the military leaders, but one demonstrated a superior talent with languages, soon noticed and taken advantage of by Cortés. La Malinche!

She soon masters Spanish, along with her Nahuatl (Aztec) and several Mayan dialects.

Six centuries later, historians still struggle with her story. Was she a traitor for having translated, thus allowing the Spaniards takeover of indigenous Mexico or was she a heroine whose translation likely saved thousands of lives? https://daily.jstor.org/who-was-la-malinche/

Well, what would you do if you were sold by your mother, given to an invading soldier, and expected to translate between these powerful men in a time when women were not to speak, let alone be seen in public? Just saying…

Regardless of today’s Mexican psyche and the celebration of Día de la Raza, she is held up as the Mother of Mexican Mestizo lineage.  More than a translator, she bore Cortés a son, Martin, symbolically the first blue-eyed mestizo, mixed blood. In the centuries that followed, Spain divided and labeled the mixed bloods into categories delineating social standing, wealth and land distribution, educational opportunities, and the possibility of buying a document that proved your percentage of whiteness.

As the colorful leaves fall from a forest full of trees, I ponder Día de la Raza, a celebration of ALL the races – a vocabulary word, a made up concept to try and explain all the new variations to the Spaniards back on the peninsula in 1519.  Maybe it’s time for change. Change of terms and celebrate the scientific label:  Human. Then, celebrate with all earth’s critters. Start by going outside and howling under the full moon.