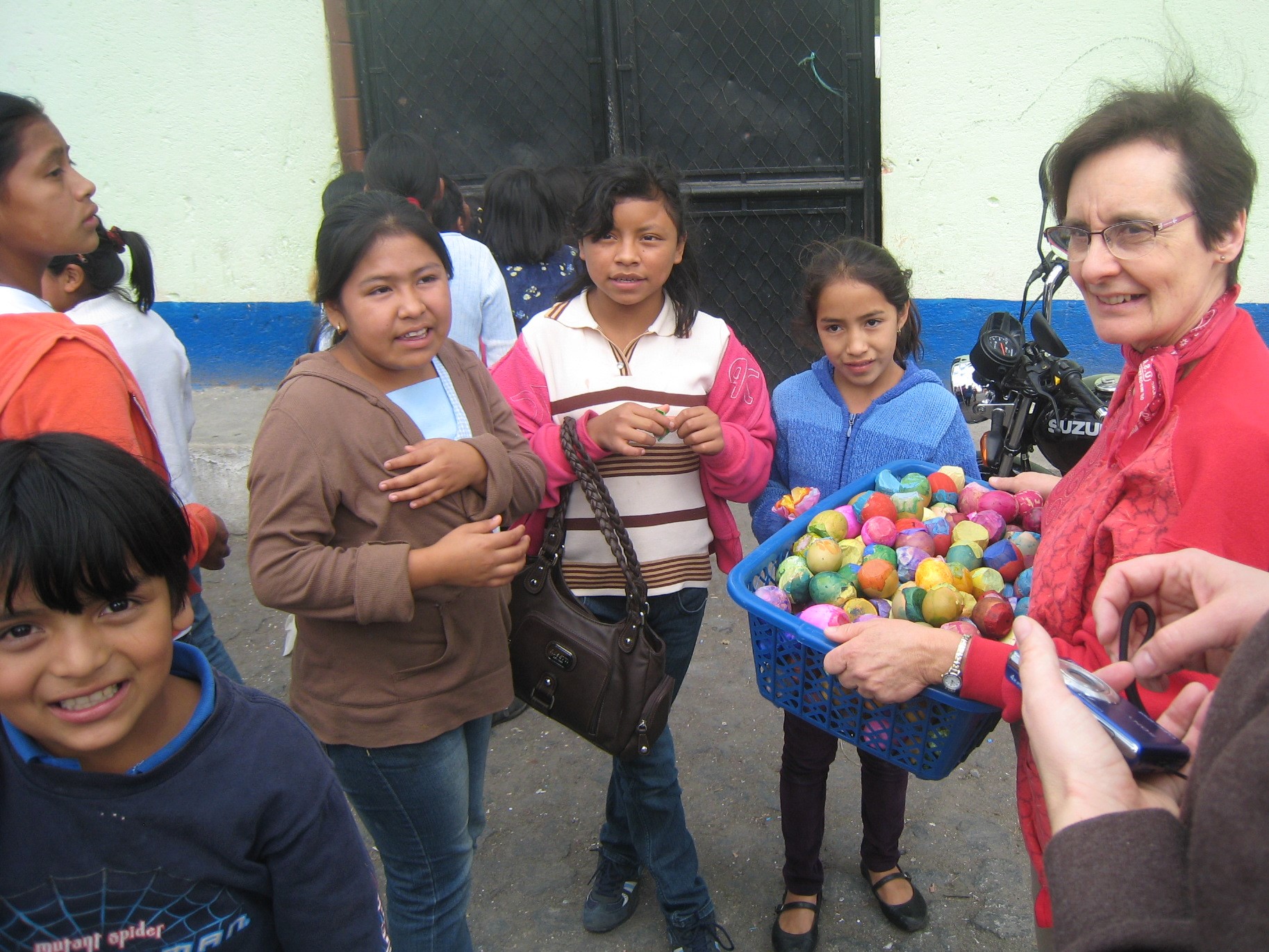 “It was a relief to dip down the mountain slopes into Mazatlán and find Carnival in progress.  There, Gregory saw his first big water, the Sea of Cortez. He stood in the foam of incoming waves, looking out into eternity before we continued north along the coast to picturesque Álamos.  There, among the whitewashed red and pink bougainvillea-draped colonial walls, we experienced Mexican “Easter” eggs.  As we walked to the town center, these colorful eggs came flying at us from behind the corner building in the plaza. Before I could yell, “Duck and run!” to my startled family, I saw some teens sprinting toward us.

For a brief moment, I imagined we were being attacked due to another U.S. foreign policy posing an affront to Latin American issues. Before we could hit the sidewalk, one perpetrator veered off, splatted a colored egg on the head of another passerby, and took off down the street spewing a confetti trail behind him.  Carnival?  This was something an eight-year-old could really get into. I knew what Gregory was thinking when he pulled on my arm.  There was a lady sitting by a stack of egg cartons on the curb. I handed him some pesos.”

Walking into another country’s traditions unaware can be fodder for misunderstanding. In the case of carnaval, my thoughts head to Rio in Brazil or New Orleans, to the north. Images of gaudy floats and scantily clad beauties dancing down streets behind raucous bands yes, of course, but being attacked?

In the paragraphs quoted above from my book, Northern Shores/ Southern Borders, my family of three had just traversed the Sierra Madre mountains from Durango to Mazatlán, focusing on not veering off the highway into the craggy rocks below. We stopped at the Continental Divide long enough for a photo and were relieved when the terrain lowered us onto the coast. We had lost track of time and place by then. We were oblivious to calendar dates, both secular and sacred.

As we entered the city, not even the traffic and loud music gave us a clue that it was anything but a regular day in Mexico. Plazas are always busy with people, balloon peddlers, shoe-shines, and hawkers of elote, that corn on a stick smothered in butter and chile. How is a gringo to know that it is Carnaval?

Cascarones. The literal translation is egg shells. Egg shells, emptied, rinsed, dried, colored, and filled with confetti. We did not know that until we witnessed the teenaged boy rush past us, plop something on his friend’s head, see colored confetti rain down his hair, and the galloping pursuit, leaving a confetti trail in his wake. We were soon caught in the cross-hairs of an egg toss. We, ignorant of the date, the tradition, and the meaning of these colorful, flying missiles, observed and then jumped into the action.  “When in Rome. . .”

Since that first encounter, I noticed cascarones available in the markets at other times of the year. They might be filled with rice for weddings, very small toys for children’s birthdays or “just ‘cuz” in any festivity of choice. We could follow the history back to eggs for Easter in the Christian celebration and make comparisons. Or not. Getting involved in an egg chase down the cobblestone streets of a colonial, one-time silver mining town, does lead to questions. That is the adventure!

Once you learn of other ways to celebrate, it opens options for enriching your traditions.  Maybe this is the year to add cascarones to your Mardi Gras and Easter. Here’s how:

Wash off eggs.  Take a spoon or knife and tap the top of a raw egg, making a ½” opening. Carefully, peel away the shell shards and empty egg into a dish. (Good day to make an omelet or quiche!) Rinse well.

Meanwhile, cut small squares to fit over the top of egg opening.

When shells are dry, fill ½ – ¾ full with confetti. Ring the egg opening with glue and cover with tissue. Let dry in egg carton and store until ready to use.

Note: I have also made very small holes in each end of the egg and blown out the contents, thus skipping the tissue paper/glue. A pin hole in one end and small hole for adding confetti works!

I highly recommend you make Cascarones an outside event!